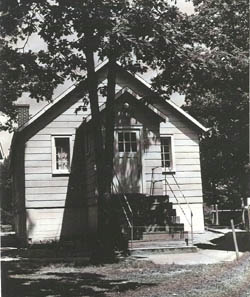 The white-frame structure in the picture above served St. Giles from 1944 when it was built until 1960 when it was moved to Brights Grove, where it now serves as an insurance office.

Website design by RelevantCuriosity and EBTech.net.
Website hosting by PCCWeb.
A member of the Presbyterian Church in Canada.

Email stgilesav@gmail.com to receive the weekly bulletin and announcements.